Comparison of Navionics and C-Map for B&G Vulcan.

I posted a few months ago a thread comparing the two cartographers' coverage:

KompetentKrew said:
…​
It seems to me that if I want to sail from Amsterdam¹ to the Spanish Rias I have to buy two overlapping C-Map "wide" charts, Y227² (Kiel to Biscay) and Y228³ (Ushant to Morocco, Canaries Azores). They're about £207 each. ...​
​
However, in Navionics+ format, the large 46XG covers the whole of western Europe⁸ - Kiel to Ushant, the UK south coast, Biscay, Iberia, Canaries and Azores, Morocco, Algeria, Mediterranean France, Ibiza and Corsia. All in one chart for about £200.​
Click to expand...

​
The Navonics arrived today, and I thought I'd see what differences I could spot.

Images follow in subsequent comments, but some comments and thoughts:

1. Comparison is between a C-Maps EW-N/Y226 vs Navionics 46XG; the C-Map was supplied in May 2019 and the Navonics arrived directly from them today; neither have been updated, and both are in the format for my B&G Vulcan (also new in May 2019). The coverage areas are different, see the previous thread, but they overlap and both cover the Channel.

2. Comparison was made on my B&G plotter, but using the remote viewer app on my Android tablet to take screenshots.

3. These being vector charts I was surprised to find that the icons for chart items like bouys were different between the two charts.

​
Presumably, therefore, the icons for chart items are not stored within the chartplotter software, but the file format of charts allows the cartographer to define their icons as well as placing them. And presumably this allows them to show arbitrary chart items - i.e. add wind farms without needing the chartplotter o/s to be updated.​
4. I'm used to the C-Map, and like how it marks tidal flow with a distinguishable coloured arrow:

The colour of the arrow changes to yellow then red with increased tidal flow.​
​
Navonics uses a white arrow which seems less distinguishable:​ 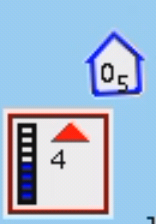 ​
It can also overlap with the other tidal marker when zoomed out:​ 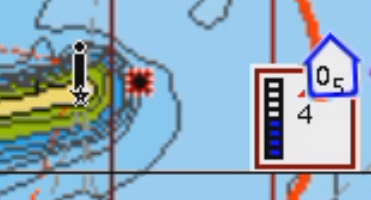 ​
I'm not sure if more information is conveyed by Navonics' two types of tidal indicator - I'll have to click on them later and see what I can figure out.​
5. Another surprise was things like the colours being different - e.g. the green of drying areas seems more vivid on the Navonics. The B&G has settings to change the colour sets, but I changed no settings between switching cards.

6. I'll leave you to decide what you think of the level of detail etc - if you look at the scale in the bottom right corner of the images, you'll see I took care to take the images at the same zoom-level (this is obvious in the animated versions).

7. Finally, the Navonics shows these red squares when zoomed out. I guess these show that there's more detail within them, or something? 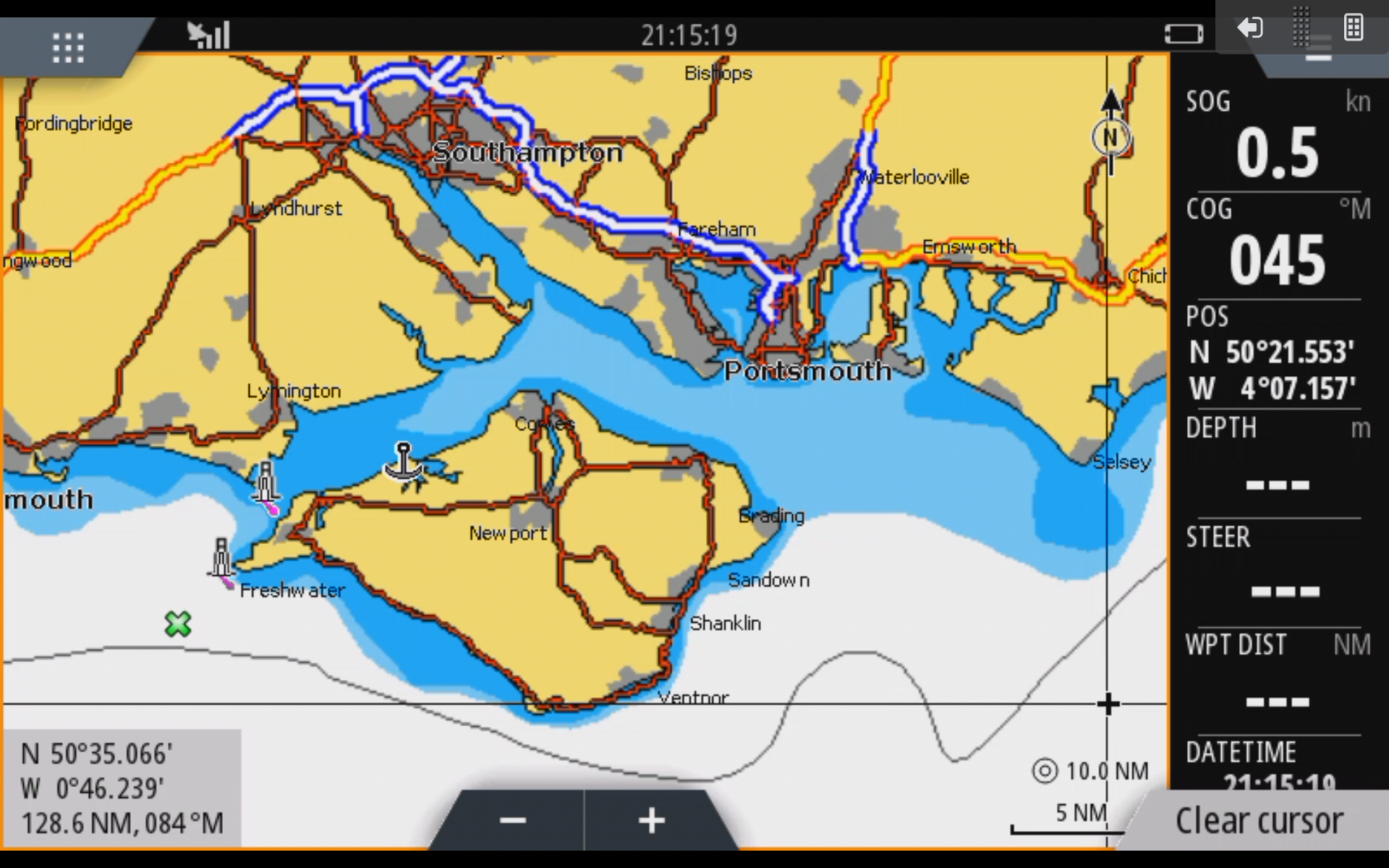 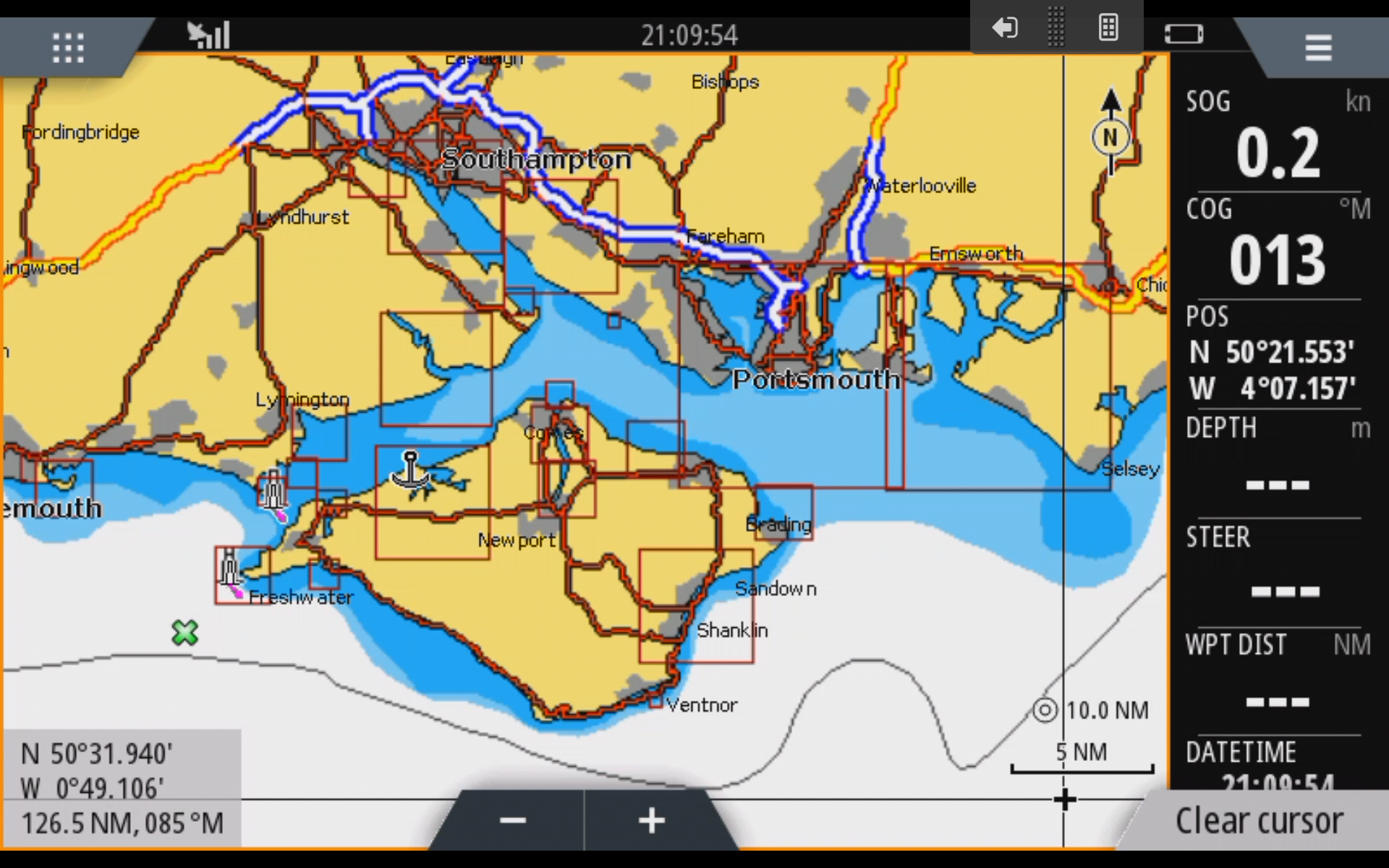 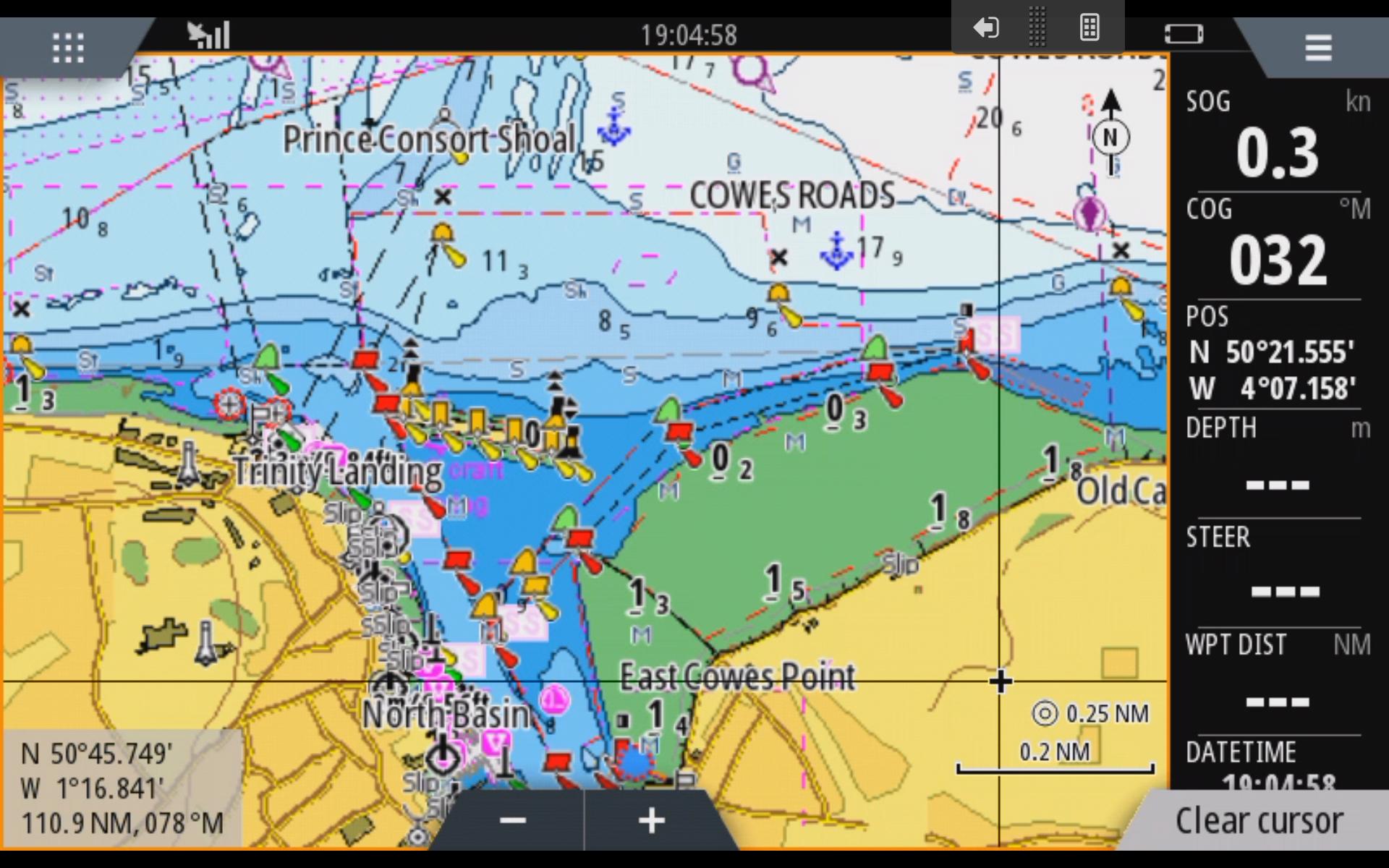 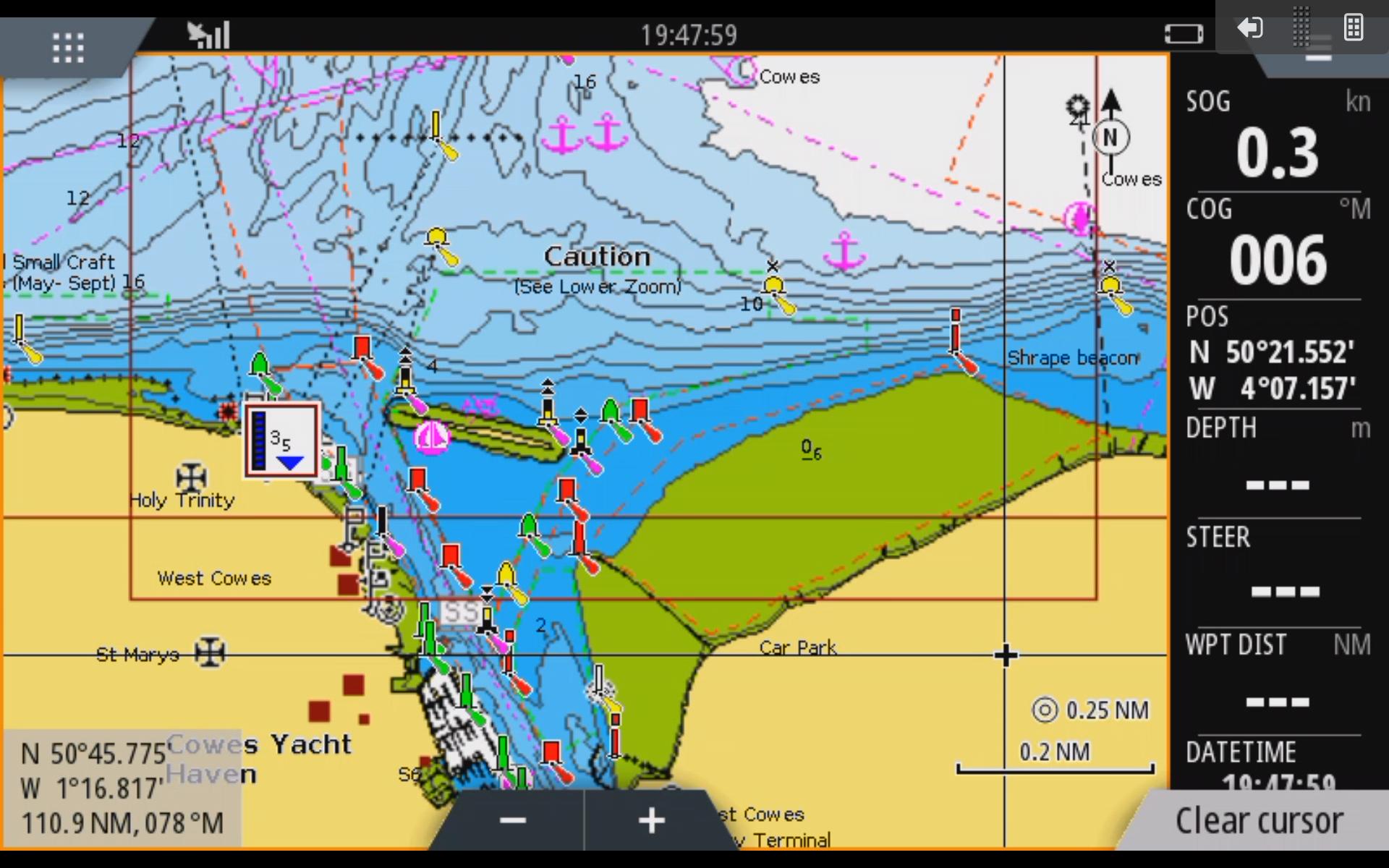 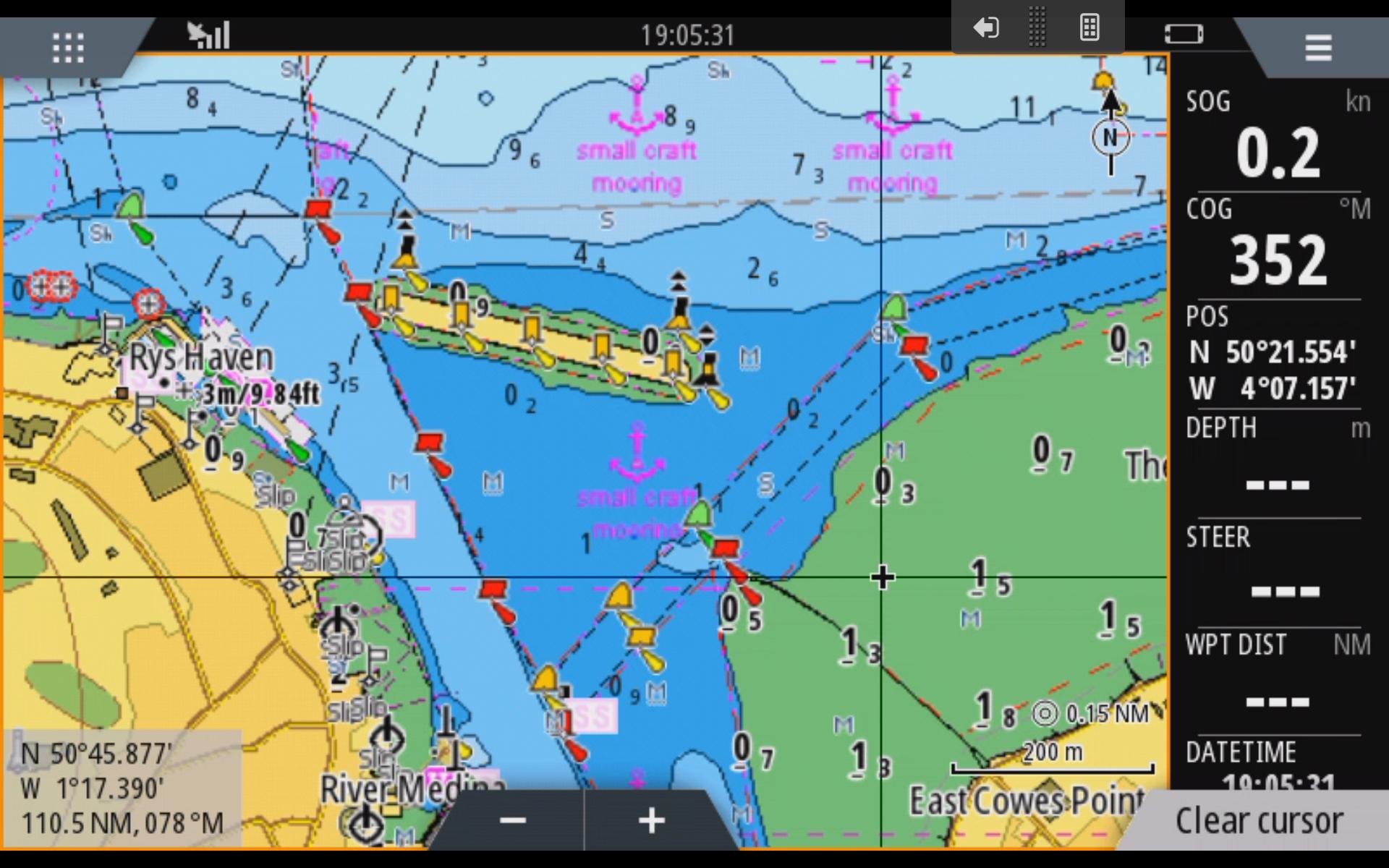 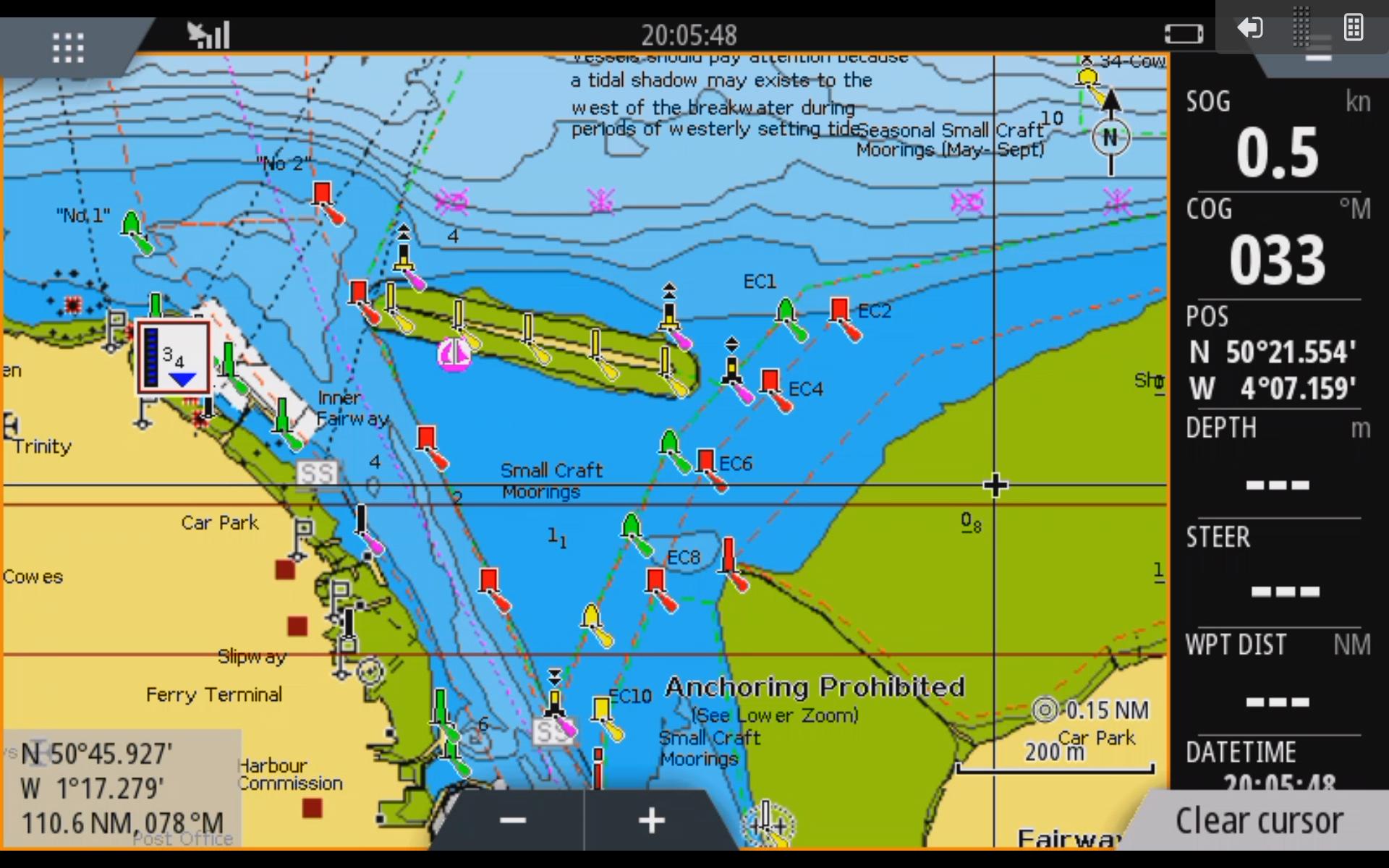 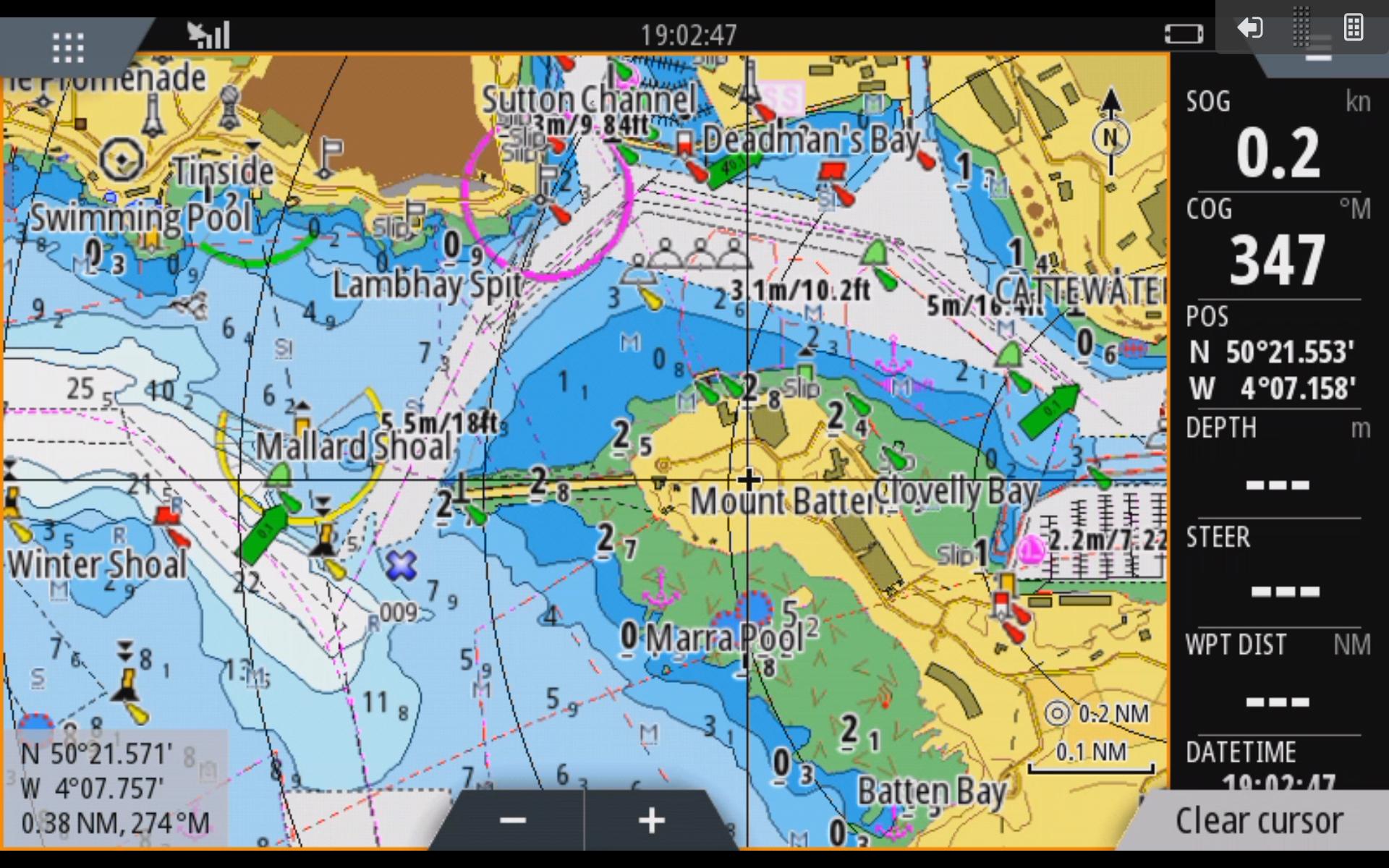 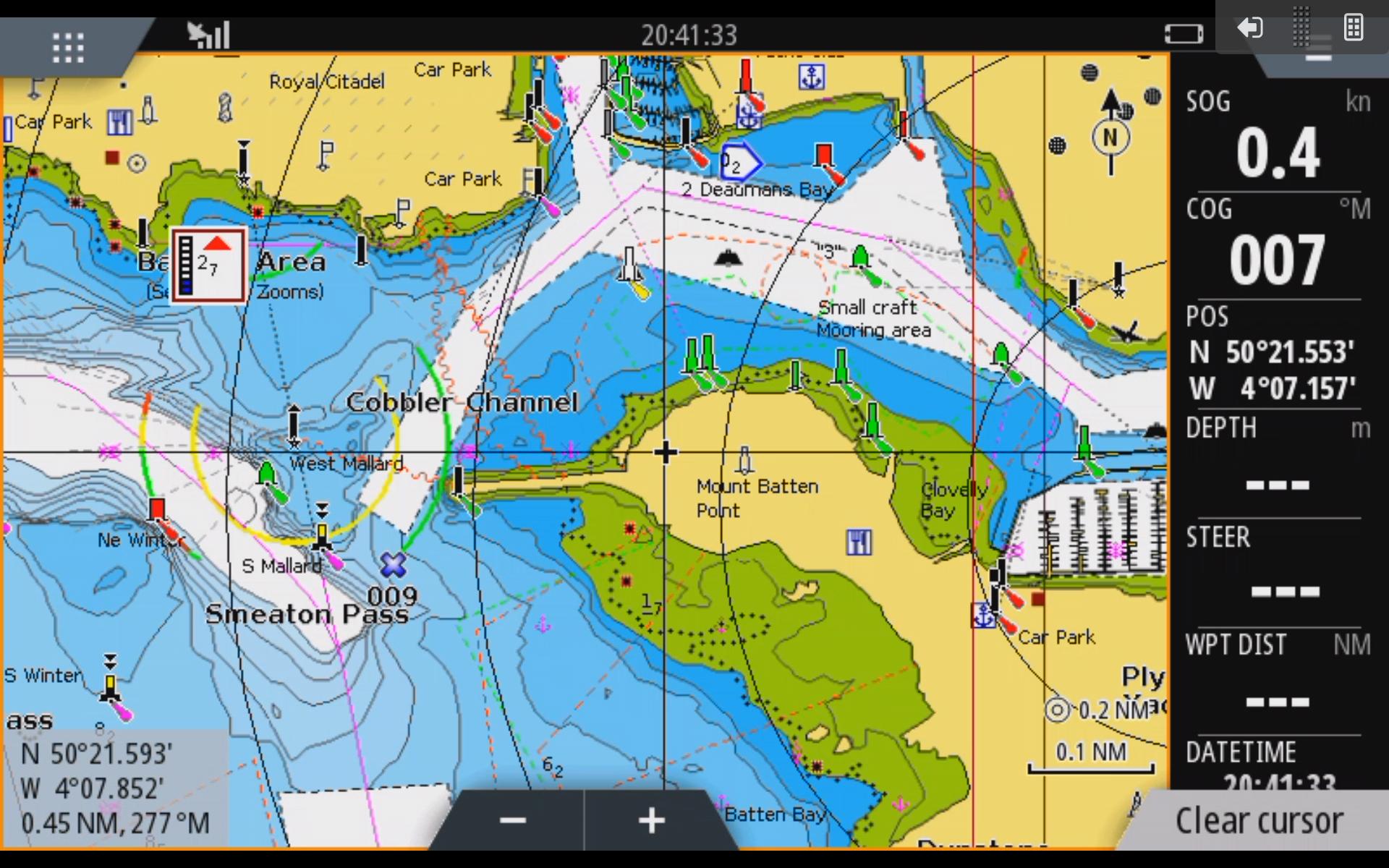 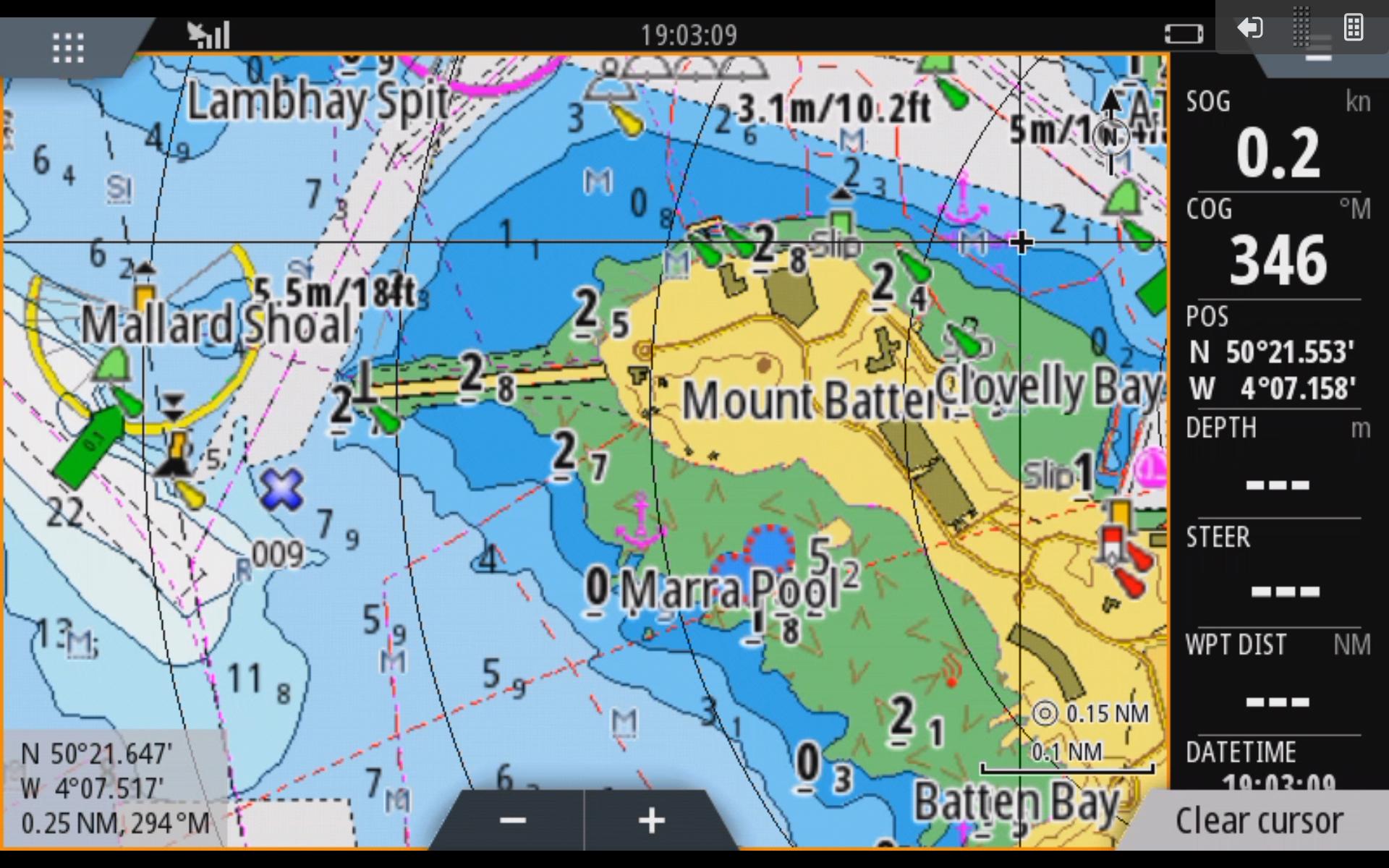 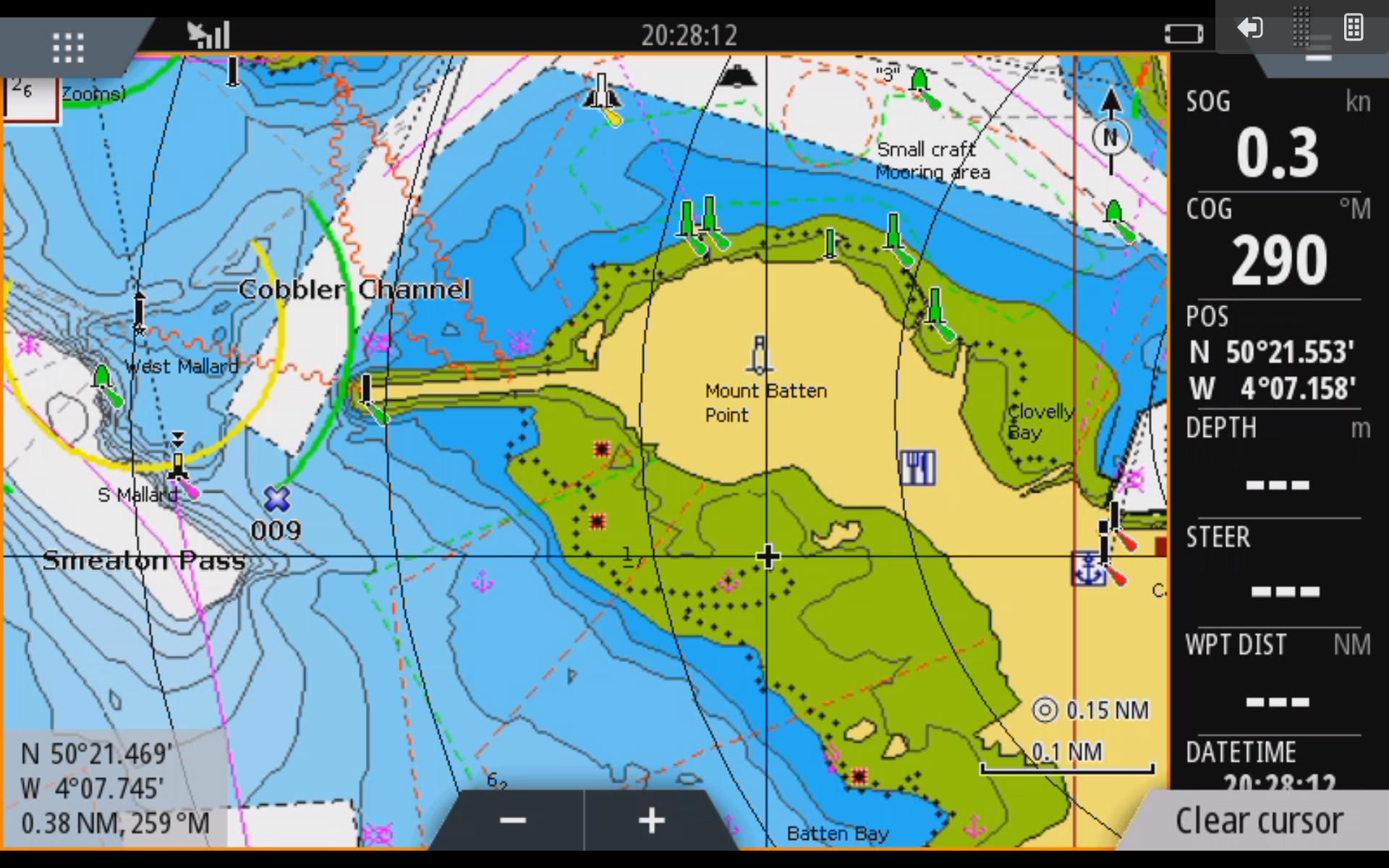 (I uploaded these as .png files, but unfortunately Imgur converted them to .jpg)

Same images as animated gifs with 1.5 second blink, for ease of comparing:

In my opinion.... CMap is very good in heavily traveled areas but Navionics Boating App is better at remote locations. I have both the App on my iPad and iPhone and the Navionics charts on Raymarine plotters(2). The App is better at showing sonar charts... but with reservations.

This is largely because commercial ships do not travel much in skinny waters or in the back waters of Fiji...

Going back to your original post, I believe that there is also s "Continental" scale C-Map chart that would cover Holland to Med on a single chart (although only south coast of UK).

Thanks, Eastlands - trying to keep this thread for comparison of detail, I have replied in the other thread about coverage.

Seeing as this thread has been linked to recently.

I'm still a bit unsure about the Navionics tidal currents, does Navionics show the real-time tidal arrows in useful positions around the chart in the way C-Map does (i.e. in the Plymouth example) - without having to further click on a spot? If so any chance of an example.


Oh I've spotted it, one arrow on Navionics to C-Maps three.

ithet said:
Seeing as this thread has been linked to recently.

I'm still a bit unsure about the Navionics tidal currents, does Navionics show the real-time tidal arrows in useful positions around the chart in the way C-Map does (i.e. in the Plymouth example) - without having to further click on a spot? If so any chance of an example.

Oh I've spotted it, one arrow on Navionics to C-Maps three.
Click to expand...

Yeah, bullet point 4 in my first comment - I didn't remember that the Navionics showed proper useful tidal arrows the way C-Map does. I can't say I've tested it extensively yet, but Navionics' tidal arrows seem harder to find than C-Maps' (maybe they show at different zoom levels?) and located in less useful places (e.g. the Plymouth screenshots).
You must log in or register to reply here.
Share:
Facebook Twitter Reddit Pinterest Tumblr WhatsApp Email Link