Jan Harber said:
Here are a few classics laid up this winter at yards between Wilford Bridge and Woodbridge, including some with very local connections:
Click to expand...

I think Clytie about to celebrate 100 years, mostly on the Deben & mostly (& still with) the same local family.
A

I saw it from the Strand, and Ipswich Station.

Frayed Knot said:
Did you notice “Barnacle Bill” as you passed Melton? You may remember her/him sitting more or less abandoned for years at Gt Wakering back in the eighties. Strange how a boat like that ends up in such backwaters again.
Click to expand...

Now I know why Barnacle Bill looks familiar. I do indeed remember him/her, thought to be someone's abandoned project, at Wakering in the '80s where my dad laid up his Dragon and we had our Hunter 701 there every winter. Lindsay and Ivan told us that she had done world cruising and, since doing a bit of research, I've discovered more about her illustrious career.
She is an S&S one-off cruiser-racer, built in Auckland to race in the NZ team in the 1974 Southern Cross Cup followed by the 1975 Admiral's Cup when she represented the RNZYS. She changed hands, mods were made including the steps on the mast and cutter rig, and was cruising for some years in the Pacific after which she must have fetched up in the far from glamorous Suttons Yard at Wakering.
Not sure what happened in between but by 2004 she was cruising The Channel and Baltic and may have re-visited NZ... she appears to be based on the Deben nowadays. There is fascinating blog called Follow the Boat to which her builder, friends and family of previous owners have contributed and filled in gaps of her history.
Her story is similar to that of another classic S&S cruiser-racer, Sunstone, now back in the UK at Foxs, Ipswich. She spent a big chunk of her life voyaging with Tom and Vicky Jackson based in NZ, after starting her successful racing career in the UK.

Re the evergreen Clytie, yes, she will indeed celebrate her centenary next year, having been built by Eversons in 1922.
Last edited: 3 Dec 2021

Re Barnacle Bill. Just looked at the FTB blog with all the comments from people who knew the boat.
I think it's the same yacht - the name was definitely BB. This was c'97.
She was sailing, close-tacking up the harbour approaches into Neiafu, Vava'u, Tonga.
Typically, we were being lazy/careful and motoring as we hadn't been there before.
They seemed to sail everywhere too - perhaps being pretty familiar with the surroundings (Fiji/Tonga was a common destination from NZ where the owner was based at the time).

We sailed in company with Barnacle Bill in 2007, having met them in Brighton where we were storm-bound for nearly a week, during which we finished off a lot of wine with them. We last saw them in Fowey or possibly Falmouth, from where they were heading for the Med. The last we heard was from them in Cadiz. They used to live in Waldringfield but we have lost touch with them.

johnalison said:
We sailed in company with Barnacle Bill in 2007, having met them in Brighton where we were storm-bound for nearly a week, during which we finished off a lot of wine with them. We last saw them in Fowey or possibly Falmouth, from where they were heading for the Med. The last we heard was from them in Cadiz. They used to live in Waldringfield but we have lost touch with them.
Click to expand...

Mmmm. So obviously not the BB I saw.

Very interesting, thanks. It ties in with the story they told us that the original owner had specified a coachroof and that S&S had tested this in a wind tunnel and found little loss of performance. I see that they replaced the Hydrovane. It was the star of the show in Brighton, when Jon returned to the boat to find the blade missing. His attempts to dive for it were unsuccessful but his son turned up for social reasons and, also being a qualified diver, managed to retrieve it (in spite of marina rules), seen here in the first photo. I think the dog was called William, one of only two canines ever allowed on our boat.

This is BB setting off in an abortive attempt to escape from Brighton but failing against the F7-8. Note the missing upper inner shroud which Jon was mortified to find loose, and even more so when my photo showed that it had happened before they cast off.

BB was brought from Gt Wakering by Chris and Fiona Gerard who kept her at Ramsholt during their ownership. The story of retrieving the boat after purchase is interesting to say the least.
She was built like a brick outhouse with a mast like a tree trunk, a massive winch farm at the mast foot, and if I recall correctly an entirely gimballed galley. When Chris and Fiona were installing electric winches they found the top of the cockpit coamings were at least 1.5” solid timber.

A few people out today. 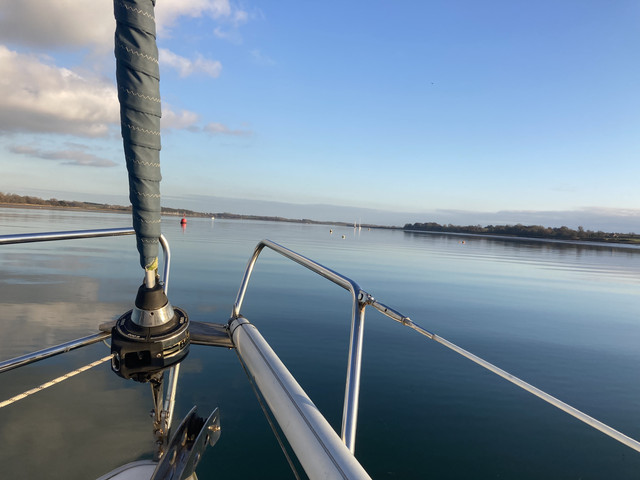 Same here.
Went sailing yesterday, and apart from one fishing boat tending to some lobsterpots, I was the only one out.

Another of Jerry Sousa’s photos of Hong Kong - yesterday evening after the typhoon blew through.

Widgeon/wigeon. Both spellings recognised.
A

are thanks, I wondered what they were
L

No sailing but we do get to see most sunrises and sunsets.
I'm looking through my window at a tree outside that has dew drops hanging. The red sunrise light makes them all look like red fairly lights. It doesn't last long though.
is shining through

Reading Homer’s Iliad, in translation of course, one gets a bit fed up with the ‘rosy-fingered dawn’, which seems to happen every day. Not only that, but ‘sailor’s warning’, but today looks OK.
You must log in or register to reply here.
Share:
Facebook Twitter Reddit Pinterest Tumblr WhatsApp Email Link