Location
On the Clyde

Chico puts in good service as one of the committee vessels for West Highland Week; excellent platform for firing signal cannons from.
J

After also most two weeks without my trusty Transit van being off the road with clutch problems, I can return to working on Chance once more and get on with removing more of the inside wood work and loading up the trailer with the old diesel cooker, sea toilet and the large bag of scrap metal and died batteries. Clean up and service the diesel cooker and then put it up for sale the same with the vintage Baby Blake seas toilet which people have said some vintage boat owners wish to put in their boats.
This time I will hope to continue with the main cabin dismantling and work out how to remove the wheelhouse roof to get the engine out of the boat and on to a trailer to transport them back to my workshop to get cleaned up and put up for sale to any one who wishes to restore the engines for their own project.
I also have to work out how to get the fuel and water tanks out and get prices for replacing them as they have been in the boat since she was build and by now will be in a very poor condition. Having being able to see one of the tanks from the engineering room it can be seen that there is a fair amount of rust on the tanks. Although they are not leaking at the moment it would not take a lot to see that they may soon do so in the near future. So while the engines are out it is as gooder time as any to replace the metal tankage. Also to work out the pipe runs for the water system and also the wiring runs through the boat.
J

What a day, today has been travelling across the country from one side to the other side. Starting on the east side of the country and driving over the Pennines to the west coast.
Yesterday after a very tiring day driving up the country from my home in the south east of the country in North East Essex. Because of a car crash on the one of the major north to south roads in the country I was using to get to my brother's home and the fact the crash was between the two slip roads I could use to take a different route to my brother's home. That Life, Having had a good nights rest I set off to Chance to get a few things sorted and clean up round the boat. Namely cover up the cooker and the toilet which were not covered up properly when I had to leave last time because of the problems with my Transit van. The clutch problem which was to be repair this last week. It was repaired but then failed after a short while and now back to renting a car to keep working. However, that is a story for another day when I am not so stressed.
I did get to Chance this morning to find her in good order with the covers I put over her still in place and doing their job of keeping the rain and weather off the deck and keeping the inside of the cabins dry. So that next time I am up working on Chance the weather will not be a problem that will stop me and my family working on her interior.

I will be posting a few short videos of the boat in the coming days to highlight what as to be done over the next few weeks and months. The three main areas to finish off are the toilet room and the main cabin cupboards and settee areas to expose the hull in these areas and finally the engine room / compartment which has to have the engines and tankage removed and disposed of and in this area it is going to be completed re-designed to bring it is line with modern requirements.
Lets hope I get my Transit van back on the road soon and I can get on with my work on Chance and make a living doing my day job as a boat builder, which helps fund these early stages of Chances' restoration .
D

I think you should not double post. You are posting the same post in your Chance restoration thread as this Silvers thread. I think it would be a good idea just to keep your restoration news only in the Chance restoration thread. It’s interesting to follow the thread. For those who receive notifications by email, they may be getting two emails, plus searches will pull up two threads. All the best, just an observation.
J

BlowingOldBoots said:
I think you should not double post. You are posting the same post in your Chance restoration thread as this Silvers thread. I think it would be a good idea just to keep your restoration news only in the Chance restoration thread. It’s interesting to follow the thread. For those who receive notifications by email, they may be getting two emails, plus searches will pull up two threads. All the best, just an observation.
Click to expand...

Does anyone know what is the ownership/situation of this boat?
S

burgundyben said:
I would think the future pretty grim for her.

Shame. She'd be a lovely boat for someone if she'd been better cared for.
Click to expand...

Tried to find this on FB but couldn't get to it - anyone know whether she is still there and how to connect with the yard?

Location
On the Clyde

savingclassics said:
Tried to find this on FB but couldn't get to it - anyone know whether she is still there and how to connect with the yard?
Click to expand...

In the first instance speak to the boatyard; if it's not there they may know where it went.

Too late! Sadly she has already been broken up! I'll have to be quicker! If anyone knows of another Silvers Bain that is in need of saving/restoration, please let me know.
S

savingclassics said:
Does anyone know what is the ownership/situation of this boat?
Click to expand...

anyone know where this one is?
B

Silverette classic wooden motor cruiser 1934 | eBay
just out of interest. I have no connection
L

The pictures are large file size, so may load slowly. 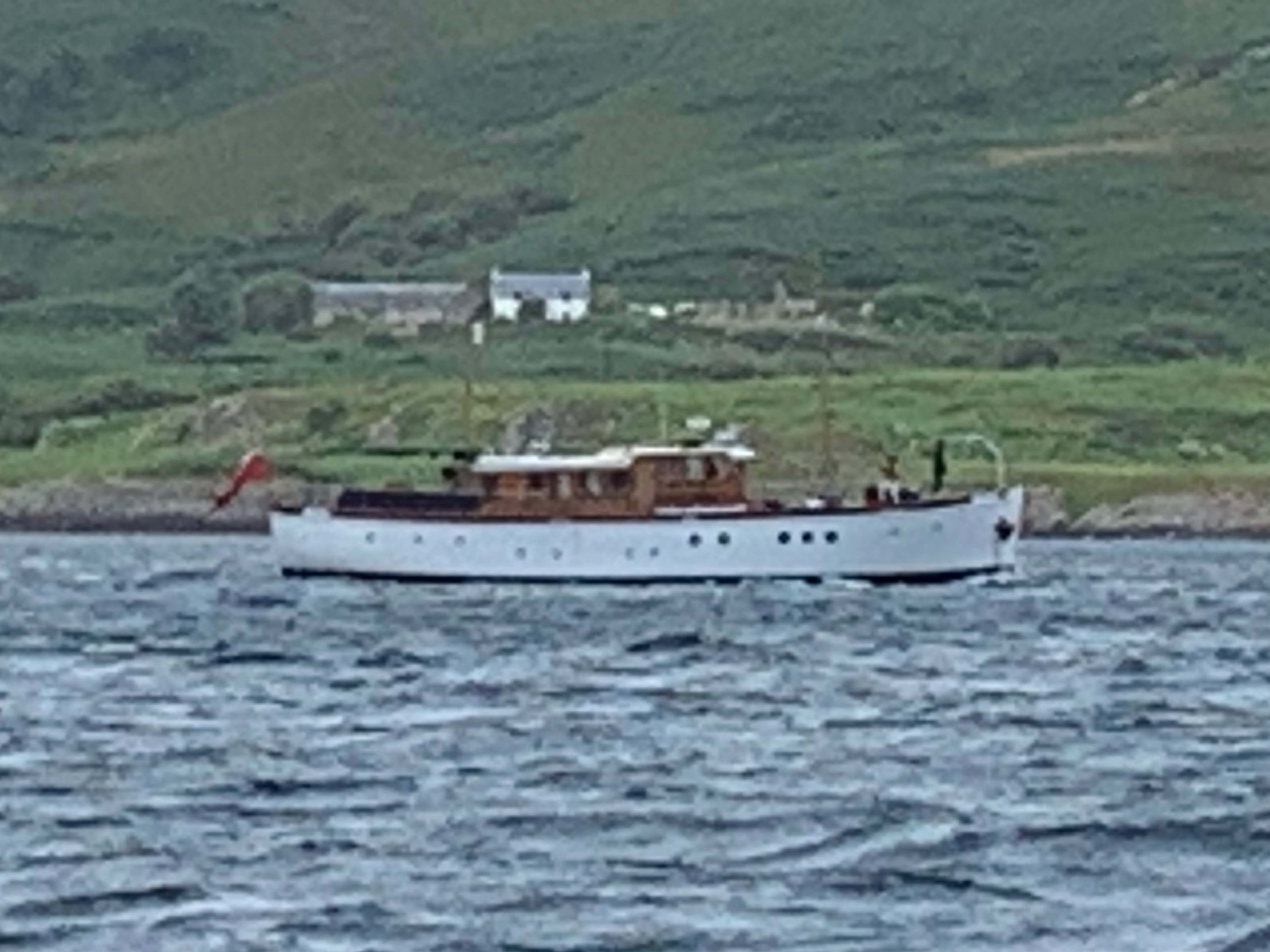 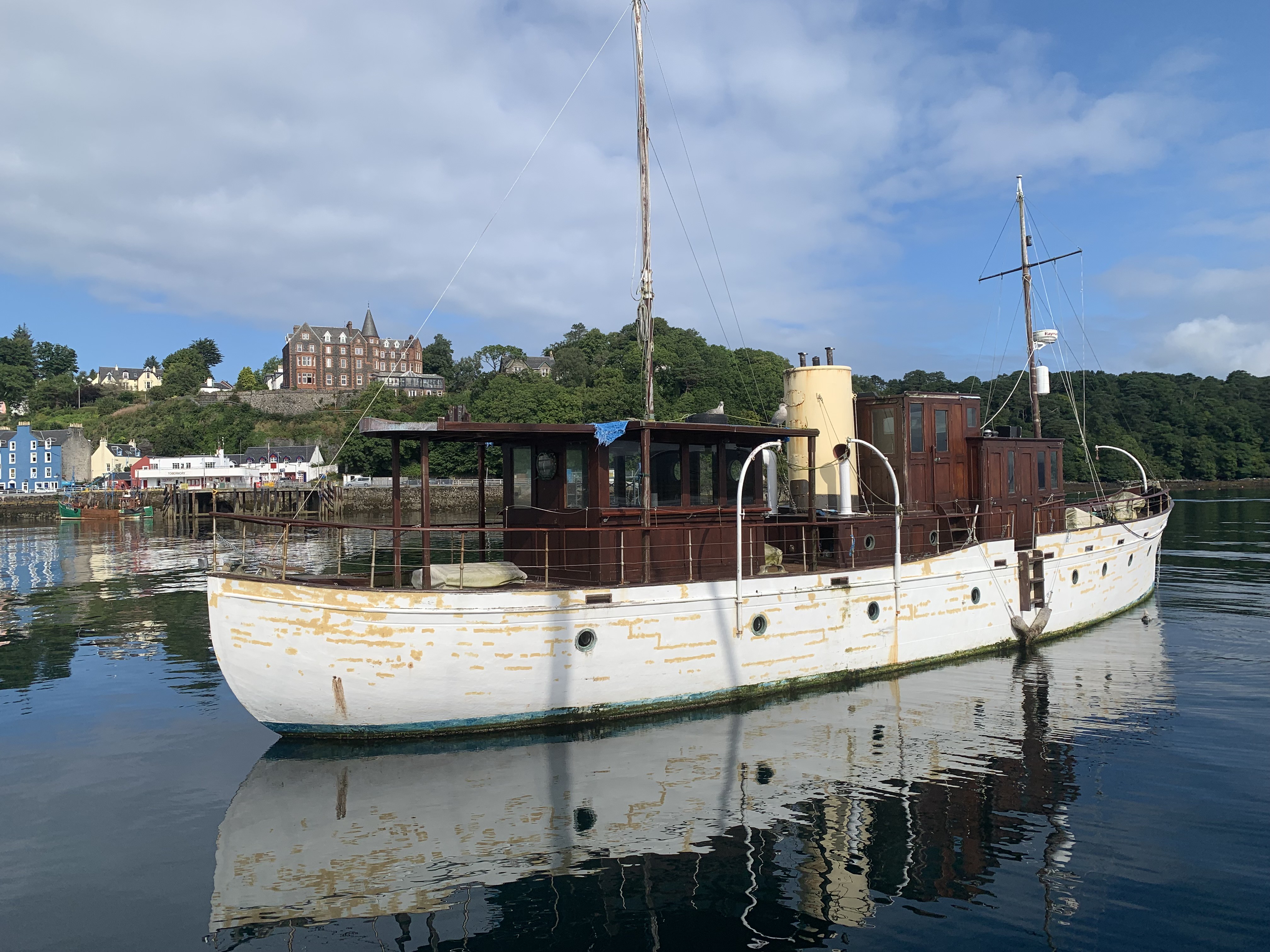 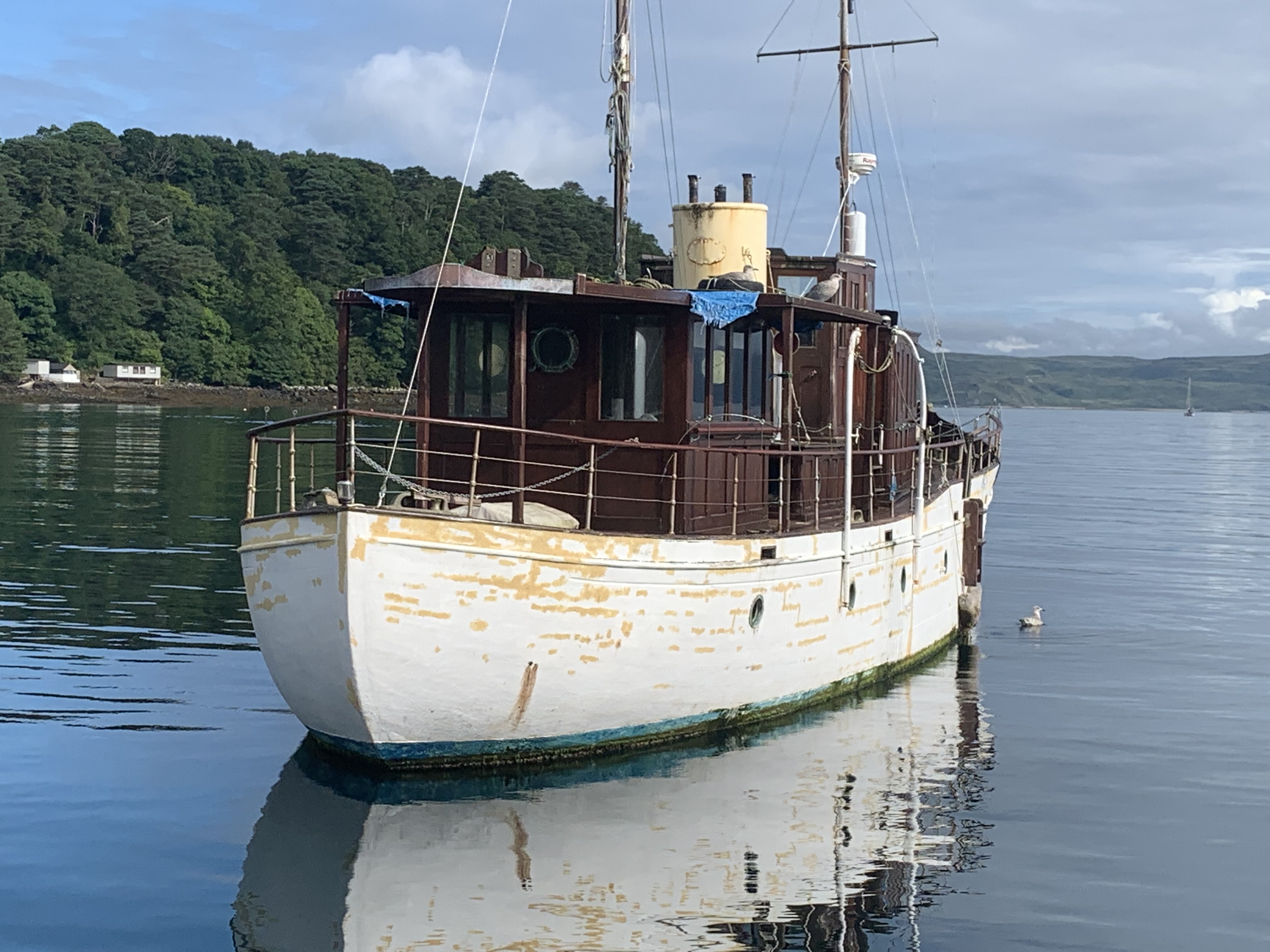 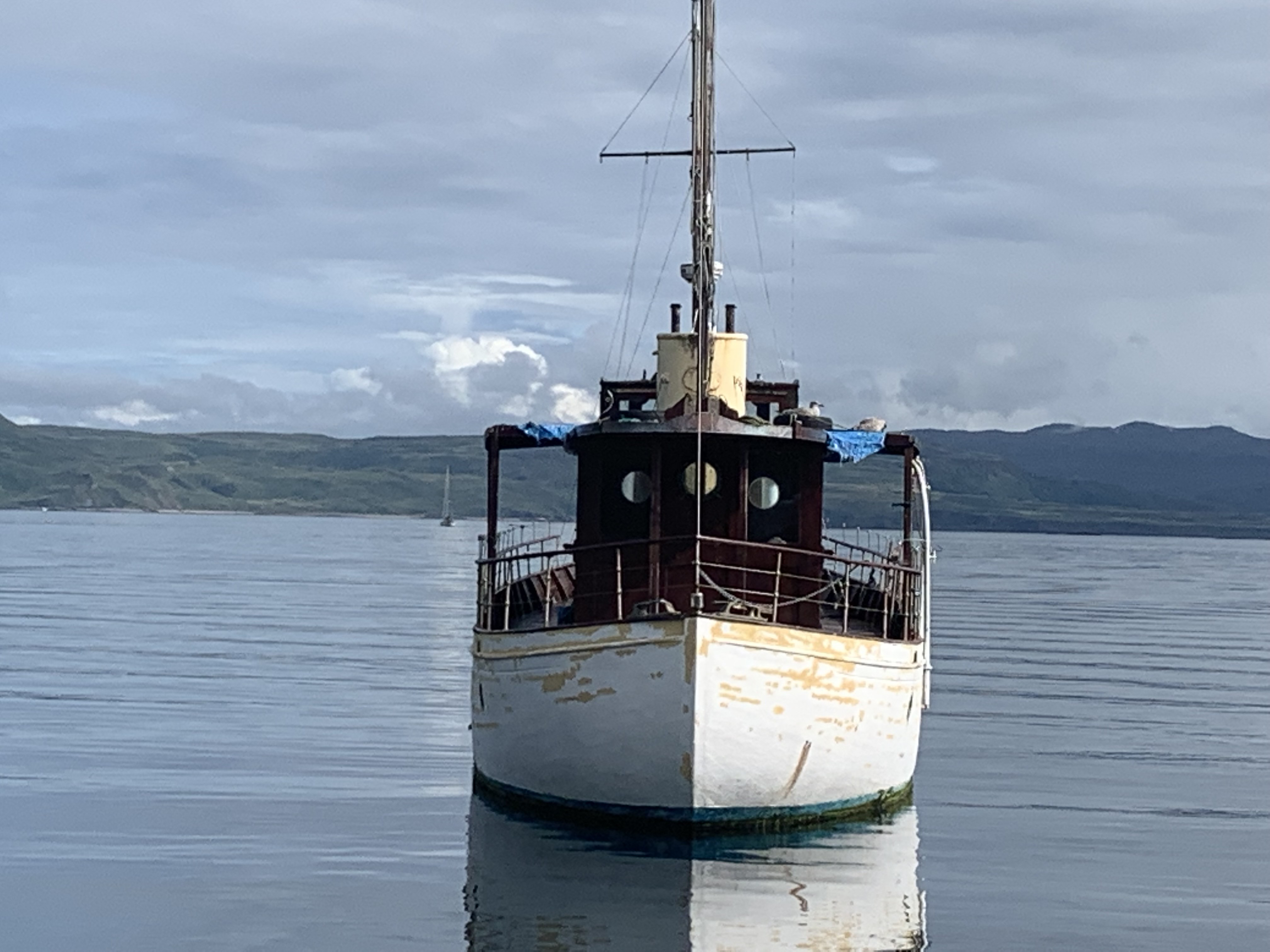 The Tobermory boat is CORDELIA. Dickies of Tarbert.
S

savingclassics said:
Too late! Sadly she has already been broken up! I'll have to be quicker! If anyone knows of another Silvers Bain that is in need of saving/restoration, please let me know.
Click to expand...

You could look at my entry on 4th January this year on the Restoration of Chance posts.
J

The good part about the old fuel filter system on Chance is that it is a non disposable system, so it just needs cleaning at regular intervals to keep it working 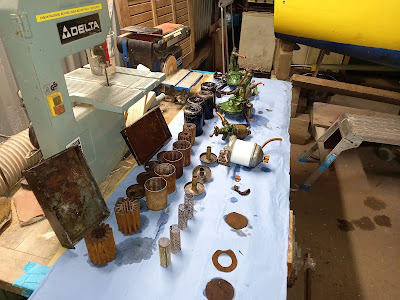 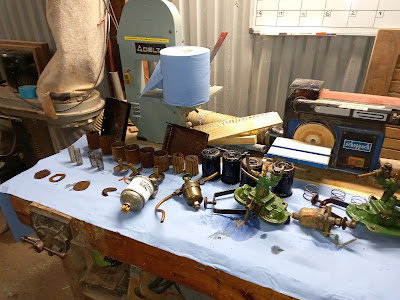 Just need a couple of parts replacing as they are worn out, apart from that the system is ready to be reused again for another 70 years or more 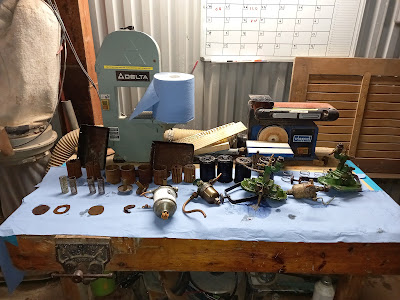 Hi fellow James Silver owners,
I quick question to the group. Now that I have removed the old Dirman diesels from Chance have anyone got any ideas as to a good size engine replacement for the old engines and what horsepower engines I should be looking at as replacement engines.

Hi
The hp of the original engines was 20 hp and the were counter rotating propellers.
P

Here is mine John Bain. .

A beautiful boat, I hope to get my boat looking like her in a few years time.
B